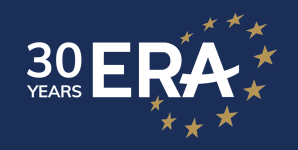 The Academy of European Law celebrates its 30th anniversary in 2022.

To mark the event, we have the pleasure and honour to invite you to a congress entitled

European Sovereignty: The Legal Dimension – A Union in Control of its own Destiny

1992 – the year when ERA was established – was important in the history of European integration: it was the year of the signing of the founding treaty of the European Union, the Maastricht Treaty. Sovereignty was already a highly controversial topic in those days, but it has recently become of even more critical relevance.

Our congress will deal with sovereignty both of and in the Union. It will explore the legal challenges arising from new concepts that have moved to the centre of public debate in recent years, including ‘budgetary sovereignty’, ‘strategic sovereignity’ and ‘digital sovereignty’.

Against a backdrop of great (geo)political and economic challenges for the Union, the congress will be an example of ERA’s calling to provide an interface and forum for exchange among legal practitioners, lawmakers, and policymakers.

It will also be an opportunity to recognise and thank all those, both institutions and individuals, who have enabled ERA to carry out its mission over the last 30 years and who will continue to support us in the years to come.

For more information on the speakers, programme and accommodation please visit the dedicated ERA website.